Predicting the scientific origin of the universe

Mizzou astrophysicist Sergei Kopeikin has spent most of his career studying how Einstein’s theory of general relativity is related to the Big Bang.

While growing up in small city outside Moscow, Sergei Kopeikin’s mother often brought home books about science for him to read, instilling in him a sense of curiosity about the world. He became particularly fond of astronomy, and in his physics classes at school, he learned about the theory of relativity — considered by many scientists as the foundation for understanding how gravity works today. The theory’s creator is the most well-known physicist of our time, Albert Einstein.

Studying the science of gravity

In the wake of Einstein’s groundbreaking achievement in the early 1900s, many scientists have attempted to test the validity of his theory, as did Kopeikin. His efforts began shortly after he enrolled at Moscow State University in the early 1970s. By studying Einstein’s theory of general relativity, Kopeikin ended up following in the footsteps of a Nobel laureate, Vitaly Ginzburg, and a physicist known for his contributions to our fundamental understanding of the Big Bang, Yakov Borsovich Zeldovich.

“At the time, everybody was fascinated about working on the theory of relativity, including me,” said Kopeikin, now a professor in the Department of Physics and Astronomy in the MU College of Arts and Science.

As a student, Kopeikin attended seminars on relativistic astrophysics each week taught by Zeldovich. Kip Thorne, now a famous American astrophysicist and recipient of the 2017 Nobel Prize for Physics, was a frequent guest of the seminars.

“Every year Thorne used to come and give inspiring, fascinating lectures,” Kopeikin said.

Kopeikin was inspired to begin reading Thorne’s book, “Gravitation,” to see if he could start understanding the science of gravity.

“To my satisfaction and surprise, I discovered that the mathematics of gravity helped steadily grow my abilities in theoretical physics, and that convinced me to choose this field of study as my future academic career,” Kopeikin said.

As Kopeikin went from student to research scientist, he joined Zeldovich's group in studying the theory of general relativity and cosmology, which included the use of pulsars.

In the simplest of terms, Kopeikin describes a pulsar as a remnant of a giant star that exploded.

“As the giant star explodes, its core collapses and it becomes a neutron star — about 10 miles in diameter — through what’s known as a supernova event,” Kopeikin said. “When this neutron star is also in orbit with another neutron star in space, it’s considered a binary pulsar. Each pulsar has a strong magnetic field and can rotate around its axis; therefore, they generate electromagnetic waves which can be observed from Earth as rapidly pulsating radio signals.”

Kopeikin believes studying binary pulsars is one of the most reliable ways to experimentally verify Einstein's theory, and by observing these radio signals, it can not only help uncover the puzzle of how gravity works, but also help scientists like him better understand the origin of universe.

“We are all interested in the origin of our universe, including why and how it was created,” Kopeikin said. “Our understanding of this creation is based on a fundamental theory of physics which allows us to employ physical laws in order to analyze the way the universe and space time were formed. Currently, all of this is done on the basis of Einstein’s theory of general relativity, and binary pulsars are unique objects for testing this theory.”

At MU, Kopeikin has resources to conduct his research such as unlimited access to scientific literature, easy communication with other scientists, and access to advanced technology such as a network of radio telescopes called the Very Long Baseline Array.

In 1991, Kopeikin was invited to teach and conduct research in Japan, where he stayed for several years before moving to Germany in 1997. After a couple of years in Germany, he moved to the United States and joined MU’s faculty in the early 2000s.

Being at MU has given Kopeikin the resources to conduct his research he did not otherwise previously have available to him, such as unlimited access to scientific literature, easy communication with other scientists, and access to advanced technology such as a network of radio telescopes called the Very Long Baseline Array. He used this array to check the validity of general relativity by measuring a fundamental component of nature that had not been tested before — the speed of gravity.

In 2002, Kopeikin conducted an experiment with Edward Fomalont at the National Radio Astronomical Observatory and confirmed that the speed of gravity in general relativity is equal to the speed of light. This confirmation was published in The Astrophysical Journal in 2004, and was recently verified by an international team of astronomers using 16 years of observational data from a double pulsar.

“I consider this as my greatest career contribution since my arrival at Mizzou,” Kopeikin said.

As Kopeikin continues to test Einstein’s theory, he said he wants to be remembered for his contributions to science. When he first moved to the U.S., he wanted to give his family a place to grow and thrive. Now, his research isn’t about being on the hunt for the next prestigious academic position.

So, as he makes plans for even more research about the cosmos, he looks forward to fulfilling those pursuits at MU.

“This has been my home for 22 years,” Kopeikin said. “I’m proud to be a part of the Mizzou academic family.” 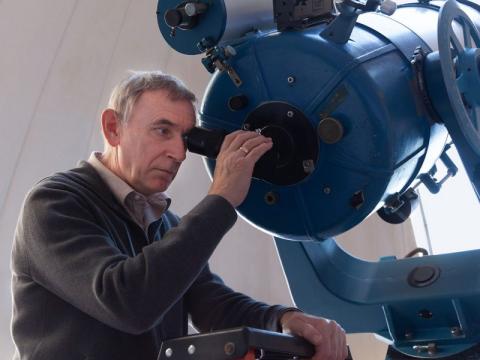