Professor Bian's career is already one of the most impressive ever witnessed in the MU Department of Physics and Astronomy. Less than 3 years since joining MU and only 6 years after earning his Ph.D., he has achieved what takes many scientists a full career to achieve, in terms of high-impact publications, citations, and overall stature in the community. As well as authoring 58 high-quality research papers at MU, he established the Missouri Integrated Nano-Analysis System (MINAS), a cutting-edge experimental facility that is unique in the United States. He has also secured two external grants from the National Science Foundation (NSF), which include work on topological superconductors and a project to develop an ultrafast laser platform at MU. He also teaches graduate and undergraduate classes that have received excellent student evaluations. Notably, he has demonstrated a commitment to mentoring the two Ph.D. and 5 undergraduate students currently in his lab, some of whom have already published scientific papers under his guidance. MU is extremely fortunate to have Dr. Bian, not only for his influential research, but for his mentoring of the next generation of scientists. 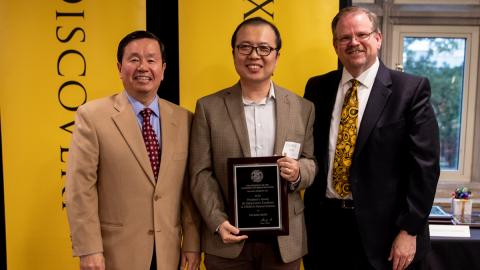