In collaboration with the Prof. Chris Arendse at the University of Western Cape, South Africa, and the Department of Energy’s Argonne National Laboratory, Prof. Suchi Guha’s group at the University of Missouri (MU) has developed a new way to make hybrid perovskites – a combination of organic and inorganic semiconducting materials – that are front‐runners of modern photovoltaic devices.

A structural phase change from the tetragonal phase to the cubic phase occurs above 320 K in methylammonium lead iodide (denoted as MAPI), a temperature well within the standard operational range of a solar cell. Consequently, a solar cell that utilizes MAPI as the semiconductor in the active absorption layer will incur losses in efficiency and longevity as the device fluctuates on the boundary of this phase change during operation. Using a modified low-pressure chemical vapor deposition method, structurally stable MAPI film was synthesiszed that remains in the tetragonal phase throughout the range from 20 to 300 K. This is the first report of a unform phase across a large temperature range in MAPI. The implications of this work are large since hybrid perovskites incur significant ion migration of the halogen atom. Minimizing the occurrence of structural phase transitions during operation can help mitigate irreversible diffusion of the halogen atoms and improve long term stability.

The first author of the paper is Randy Burns, a graduate student in the Physics and Astronomy Department (MU). This work was supported by the National Science Foundation.

The picture at right represents a low-pressure chemical vapor deposition system for the growth of hybrid perovskites. 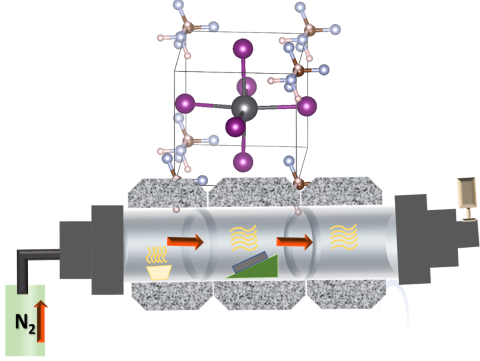