What made you decide to study physics? I’ve been curious about how things work for as long as I can remember, and since I am fortunate enough to have a very math-oriented mind, physics seemed like the natural choice.

If you are a dual major with engineering/computer science, how did physics help with your other courses? My computer science and physics degrees have had a surprising amount of interplay, despite having almost zero overlap in courses. Firstly, the higher level math that you take for a physics major is a major upgrade to your logical thinking and problem solving skills, which maps directly to programming. The abstract vector math used in quantum mechanics also appears in machine learning models. It goes the other way as well, perhaps even more so. My programming experience has been a great asset in pursuing research opportunities and solving computational problems in physics.

How easy/difficult is it to pursue both degrees? The actual workload has been manageable, I’ve taken 15-19 hours each of my eight semesters. The problem is that is took a large amount of setup to get there. I completed all of my gen-eds in high school, a whole two years worth of classes, and I’ve still had that amount of work to do to complete both degrees, since the two have basically no overlap. The computer science work takes more time, but the physics work is more mentally draining. If you have to work a job while going to college then I can’t recommend going for this combination full-time, and if you don’t have any transfer credits then you’re going to be majorly over-booked or it’s going to take you like 6 years. Keep in mind, certain engineering dual majors have course plans worked out with the physics department to make it doable in a normal amount of time, but computer science is not currently one of them.

What has been your best (or most surprising) MU experience so far? I got the opportunity to work as a TA for physics 2750, leading my own discussion section full of students. It was an amazing opportunity that helped me realize my interest in teaching, expanding my prospective career opportunities.

What advice would you offer to current and/or future physics majors?  If nothing else, join SPS and/or Astronomy club, whatever piques your interest. Use that plus your classes as an opportunity to make friends. Physics attracts a particular kind of person, generally the open-minded, kind, accepting, but also quiet to socially inept kind. So don’t worry, we all get it. Put yourself out there, we’d love to have you.

What do you think is the social relevance of physics; why is it important that there are people with this expertise?  Physics is the future, like almost the whole thing, in my opinion. Sure, there’s advancement to be had in subjects like biology or chemistry, but what could be more relevant than understanding the nature of electricity, quantum mechanics, materials, and literally all of space? If the advancement of technology is a car then there’s a physicist in the driver’s seat. 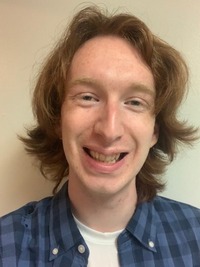